This weekend we are off to Cumbria on a little adventure in the next few days and I’m really excited to get back there. But we have had to arrange some car hire UK style in the form of a lovely little typically English 7 seater as we can’t all fit in our own car!

After going on an organised ghost hunt with Alone in the Dark Entertainment to Nenthead Mines, near Alston, I thought it would be lovely to visit this huge mining museum in the light of day. I was so impressed with the mines in the pitch black, but I still think you miss so much of the history and the beautiful scenery in the dark that it warranted another visit during the day. 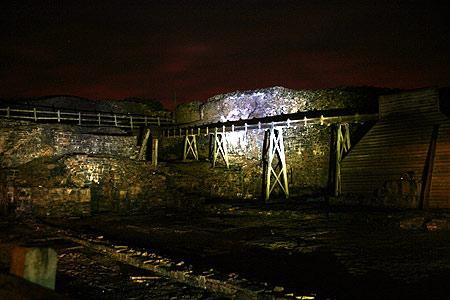 So while I was looking at some of the Nenthead Mines information, I wondered about other Mines that are classed as haunted and thought about how there must be hundreds all over the Globe. Especially with all the tragedy that surrounds these dangerous places. Whenever you read about mining history, you always hear about the cave ins, the explosions and the horrid accidents that happened to those poor workers so no wonder these places are mostly haunted!

With all these lonely souls buried deep within the earth, it’s no wonder people who visit these sites get some kind of unexplained activity. Everything from whistles and bangs, cries for help and screams, to full bodied apparitions of the miners killed there.

So here are the top 10 haunted mines around! 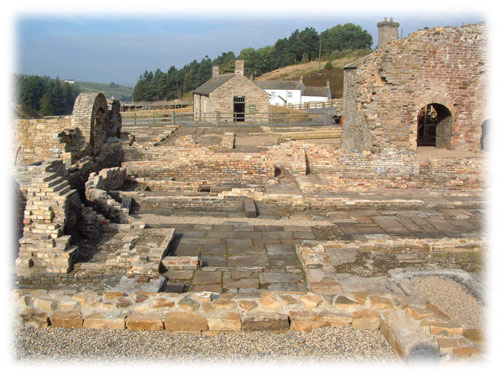 An old lead and silver mine, this is the largest mine complex in Britain. Loads of ghost hunters have been to Nethead mines in search for the paranormal. They have experienced everything from voices, growls, phantom footsteps, mists, strange lights and shadow people or black figures.

This is a really interesting place! It is steeped in history but it’s a very creepy, lonely and isolated place too so definitely not a good place to visit for the squeamish out there! 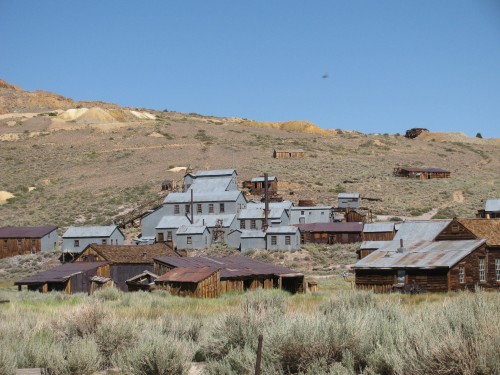 Bodie is one of those ghost towns in California which at one point boasted over 30 Mines, 65 saloons, opium dens and would have almost certainly had plenty of ladies of the night. It was described as a sea of sin according to one Preacher in the 1930’s, after they struck gold there. There were horrific deaths in the mines usually down to murders involving ownership and gold, you name it. The place must be littered with ghosts!

This eerie town, remains unchanged from when it was last abandoned in the 30’s. There are canned goods still on the shelves in the grocers, and even caskets still in the morgue! No wonder the Park Rangers who now look after the site will not venture anywhere in this creepy place alone. 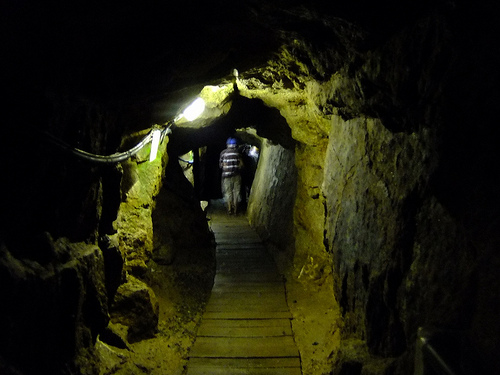 Pordark mine is Britain’s deepest and darkest mine, that dates back probably to Prehistoric times, but was at it’s peak in the 1700’s. Tin would be harvested from this old and eerie place. Several spectres are know to haunt this mine, but you are more likely to hear strange noises or see swirling mists than actually catching a glimpse of one of the ghosts. If you are really lucky, like one of the ghost hunting teams a while back, you will be subjected to a barrage of foul mouthed spectral abuse by the ghost of a long dead miner.

The Copper Queen Mine, Bisbee, Arizona This used to be a copper mine which dates back to 1877. There has been over 125 men killed within the mines, 3 of which were murdered in the 1890’s during a labour dispute.These 3 men are believed to still haunt these mines and the paranormal activity that surrounds it mainly consists of the feeling of being watched and an oppressive feeling. People also sometimes get feelings of both anger and sorrow.

One ghost hunting team recorded a temperature fluctuation of 27 degrees, which is a huge amount and they could not find an explanation for this. There have also been witness accounts of heavy booted footsteps in and around a campsite, near to both Brisbee town centre and the mines, they all thought they could be the footsteps of long dead miners in their heavy boots! 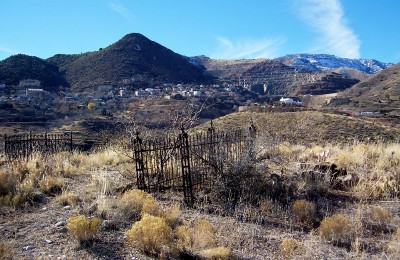 Jerome is supposedly the biggest Ghost Town in America and was a mining town in the 1920’s, but the most actively haunted place there is the old miners cemetery. It’s looks like something you would see in a western, similar to Boot Hill! It’s a place called “Los Dias del Muerto en Jerome”, the grave there date from 1897 to 1942. The whole town and the graveyard are teeming with ghost stories and you can see why, it’s never changed since the 1920’s. Only 450 people live there now and they mainly deal with all the tourists. Visitors to this lonely place often experience ghost footsteps,distant voices and see dark figures around the graveyard. 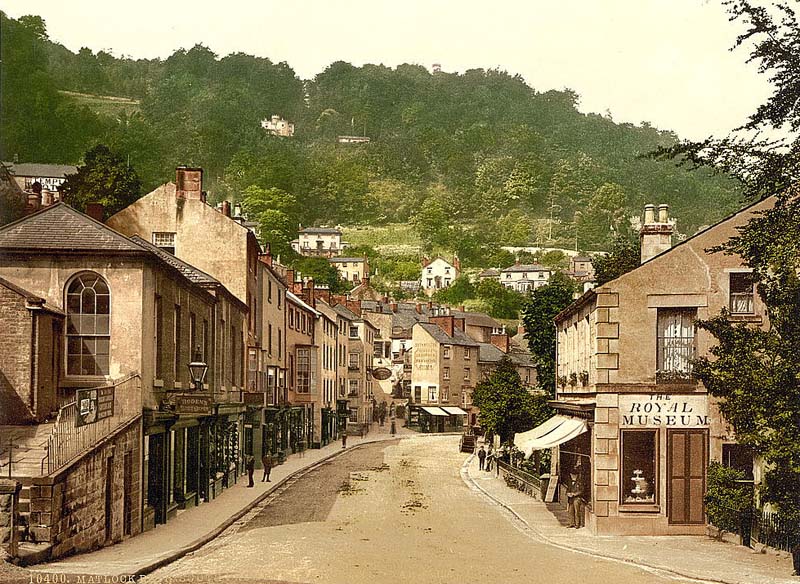 A Black dog or Shuck stalks these lands surrounding Matlock Bath, including the hills, cave and mines in the area.This tall, foul smelling beast with wide red eyes and pointed yellow fangs, has been terrorizing locals and visitors here for hundreds of years. 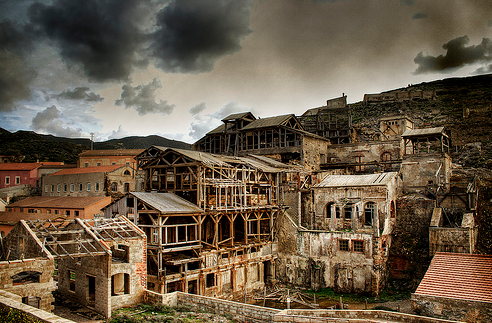 Argentiera, is now a ghost town, but was previously a very profitable gold and silver mine during the 1940’s but the town and it’s mine date back even further. It is said that due to the proximity of the sea and the types of rock there have been numerous cave-ins here and locals tell tales of long dead miners who were buried alive that still roam these deserted mines and buildings that surround them. 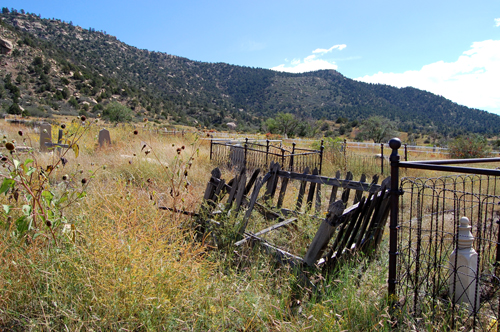 Dawson cemetery is now all that remains of Dawson town and it’s mines. This huge coal mining town was once buzzing with life right up until the mine shut in 1950 and the town was relocated.

The mine itself had two massive disasters. The first where 263 men died in 1913 and the second in 1923 where 123 men (mostly sons of the men killed previously in 1913) were killed in underground explosions. All these men were buried here in Dawson cemetery in mass graves marked with white crosses. Since then many sightings of ghostly lights and even apparitions of dead miners have been seen up at the old cemetery at night.

Well I hope you have enjoyed the little look into the ghostly goings on in some of the World’s most haunted mines! Until next time…